Choir Poster: Send it to everyone you know! 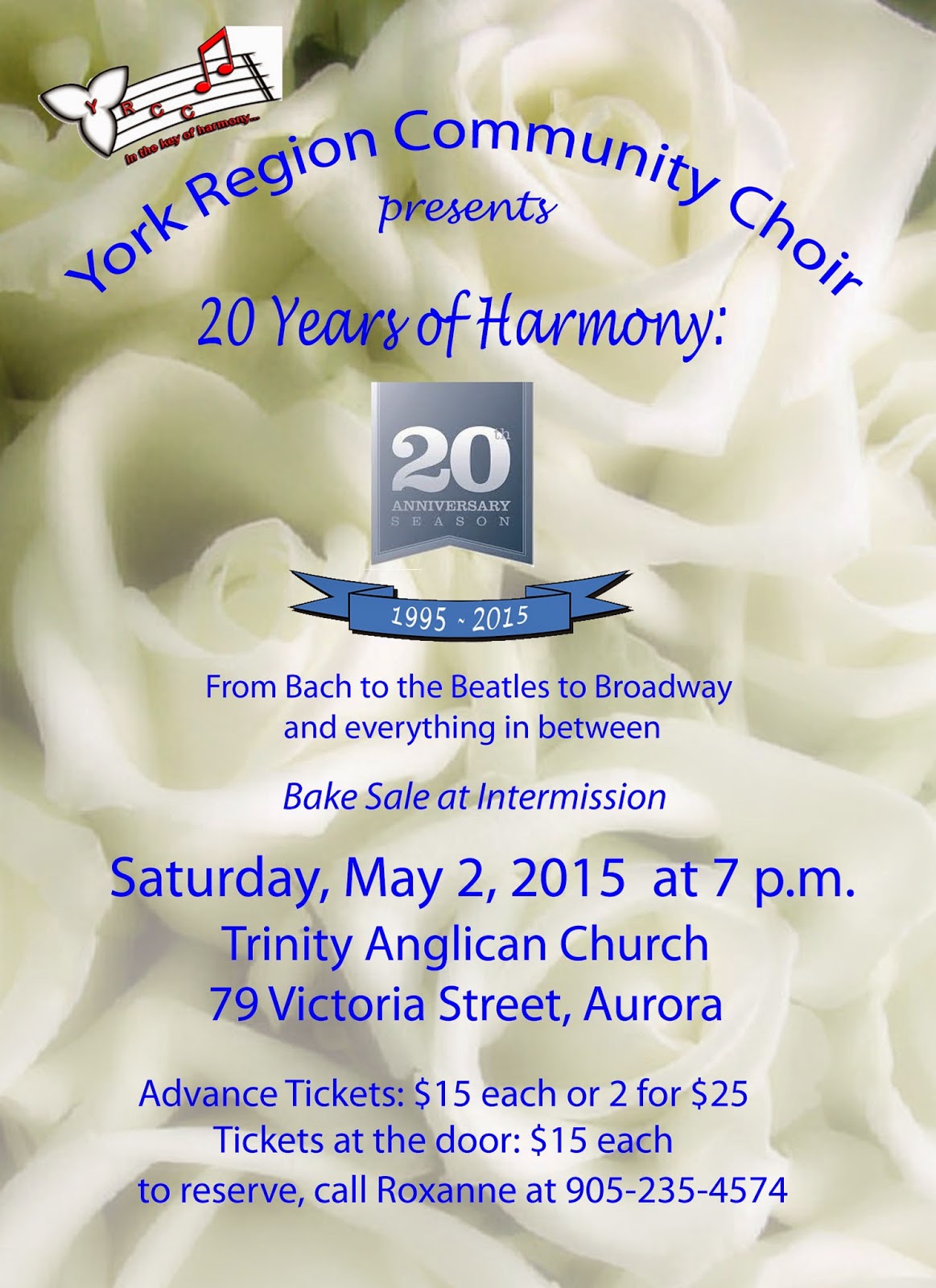 Warm-up was all the movement we learned for Another Op'nin'!
Basically, we're holding our binders on our hips in our left hands, like we do when we walk. When you sing Another Opnin, you hold your right hand out and up, like you're introducing someone on stage. Point up left, centre, right for Philly Boston Baltimo'e. Say Hello: tip your hat. Job: thumb up. Make your future forget the past: point up left sweep hand over forehead (forget). Pain: hold open hand on chest (nobody can see your belly). 4 fingers, point like at a naughty child. 3 fingers, hand on forehead. 1 finger, shrug at your neighbours. Hat: same as say hello. Overture: cup your ear. Cross fingers, hold heart. open the curtain. That's it.

All I Have to Do is Dream: easy as pie, and beautiful!

Moon River: You got it! It now sounds as easy as pie and it's beautiful!

Yesterday Once More: The ending is so cool. Remember to start to be soft right after the Sopranos sing It's yesterday once more. Both shoobie-doos are soft and the basses come in strong, but everyone else is soft for one smore.

6:30 Born This Way
Boogie Woogie Man at break
Solos and duet stay after

Run-through rehearsal at Trinity Anglican Church in Aurora.
Soloists and small groups will come early to work with microphones.
Everyone else, be there and ready to start at 7:30, so maybe aim for 7:15?
7:30 we start from the beginning and run through the whole show. We might finish late. Be prepared to stay a bit longer if necessary.

Posted by Renate Naghavi at 2:25 PM No comments:

We were talking about how Moon River should flow with more ease now that we've got the hang of it, and not with the intensity that we had when we were learning it.

Here's a video that Sophie found of a choir singing our arrangement, very beautifully. And, some of them sing and dance! (And we get stressed about snapping!)

The colours and the graceful wave-like movements also help to create the peaceful flowing water effect. We sometimes sound like we're white-water rafting ;-)


Posted by Renate Naghavi at 3:19 PM No comments:

With less than a month until the show, you should be spreading word around. Send your friends and families a note to tell them to set the date aside. We'll have posters and tickets available next week.

6:30: Musical Medley- we reviewed B&B, Razzle, DQ, Joseph. Watch for fermatas in B&B and remember the long guests and the short guests. Razzle- dazzle with those rests, sing loud at What if your hinges, and smile while you sing the last Razzle-Dazzle. There were timing issues in DQ. In Joseph, at the back and forth part, Altos sing with Sopanos and Tenors sing with Basses and nobody holds.

We warmed up with Another Op'nin'. We are memorizing this one, so that we can move and do motions with it. We're learning the movements next week, so memorize this week. The movements will probably help with the memorizing. (some people were surprised about the memorizing thing- I told you about it for the first time on January 7th. And, we have rehearsed it several times, and each time I mentioned that we would memorize it. Maybe you were away or talking/not paying attention)

Yesterday Once More went beautifully with Janet singing Lauren's solo. The sopranos fixed there messy bits. We reviewed the ending. I recommend you memorize your "Once More" so you can watch.

I'm Always Chasing Rainbows looks cool! Everyone snapping together is really special. Try hard to learn your part well enough so that you can sing and snap. Watch me for the direction of the snaps. We all have to be together. Remember- they're the same snaps as in Blue Skies and if you can't snap, just move your hand the way everyone else does. Apparently, this is extra hard for lefties.

Tup Tuppa was awesome! The sopranos are very strong as many of you have memorized this song and are carrying the others. Follow your friends; they know the way! The tenors, too, are rocking their part. Sapphire played for the basses the first time. Your part is the hardest. Don't stress too much about it. Just sing something down there.  Sing a third below the tenors, or an octave below the altos at parts and that's cool. Altos are getting stronger every time! Sapphire played for you and it felt great. Be sure to sing out loud when you have the melody on the second half!

Moon River is really, really good! I'm so proud of you! Just one thing here: you sound like you're trying really hard but it needs to sound easy. Think Andy Williams laid-back. You have to try to make hard sound simple. It's not James Bond, it's Breakfast at Tiffany's.

You Raise Me Up!!! Bill is back! Bill was the one who introduced us to this song at the Stephen Leacock Theatre a million years ago. We fell in love and have been singing it as a choir for ever, since then. Bill is going to sing Stanley's solo, the first verse and chorus, and we'll remember that first time, and looking up Josh Groban and discovering a whole world of beautiful music. Thank you, Bill!

Hello, Goodbye! So much fun!


Next week:
6:30 will be Musical Medley again, and the following week will be Born This Way. So, we need to finish the Musical Medley! Boogie Woogie Man will meet at break. Solos and Duet meet at 9:30 for the next 2 weeks.

Posted by Renate Naghavi at 8:55 PM No comments:


Posted by Renate Naghavi at 10:06 PM No comments:

Yesterday Once More was very pretty. The ending is supposed to be soft. Altos shoobies are soft and Sopranos move down to the second note of "more" softly. Only the bass is strong at the very end. For everyone else, the word "once" comes on beat 2 and lasts 3 beats, then you go down to "more".
Sopranos, you need to pay attention to the following:
pg. 5 bar 29-30 "be-fore" has 4 syllables. Look at "fore".
pg. 5 Shoobie do lang lang, the note is lower than you want it to be. It's actually the same note that you end up on singing "before".
pg. 6 bar 38-39 "had" has 2 syllables.
pg. 6 bar 41-42 "changed" has 2 syllables.

Button Up Your Overcoat gets better every time. The subway works well now, just remember that the sopranos and altos have to be soft enough to hear the tenor and bass "French fries" line.

Tup Tuppa gets better every time! Really, the first time through was amazing, especially the first page! Each section had a turn having Sapphire play their part, and it was really, really good. A number of sopranos have taken the suggestion to not look at their music, but just sing it often enough to memorize it, and it really worked. They were watching me, and I was pretty much directing to the sopranos. The other parts mostly need down beats and up beats anyway, which I try hard to keep clear.

Moon River is so cool! We did an awesome job of learning this one relatively quickly. We went over the Soprano and Alto "oohs" at page 7 (Sopranos divide) and page 8 and 9. The whole song is done and sounding awesome!

We Rise Again is such a treat to sing and to hear! I just love it! Something we have to remember is for the Sopranos and Altos to keep it soft during that first We Rise Again (page 5/6) so we can hear the Tenors and Basses who have cool stuff going on. Also, if we're loud right from the start, we risk sounding noisy and not musical, as that melody repeats and gets louder.


Posted by Renate Naghavi at 10:03 PM No comments:

Renate Naghavi
Newmarket, Ontario, Canada
I conduct the York Region Community Choir. It's a volunteer position, but it's a big part of my life. I love singing and I love leading the choir. It's a great way to support our community: Newmarket, Aurora, and beyond. The choir itself is a wonderful community. Although I worked full-time near home for 7 years with brilliant Engineers in the nuclear supply chain, and earlier in my life taught ESL to adults full-time in Toronto for 8 years, being a stay-at-home mother has been the biggest part of my life. I enjoyed the time I spent with my children and I continue to put family first. I also enjoy gardening, reading, writing and blogging.

Harry is the choir's greatest supporter. When our children were little, Harry set aside every Monday night so that I (Renate) could go to choir without worrying about what was going on at home.

He made sure the van was packed every Monday and every time I set out for a choir event. You will find Harry at every concert selling tickets, carrying things, moving things and plugging things in.