Pete Seeger and the Power of Singing


A friend sent me a link to this article on Pete Seeger, an excellent obituary, knowing that I would like it, that I would be happy to have my own philosophy affirmed.

Singing is something that everyone can and should do. Singing in a crowd is magical and powerful. At choir, we know that and love to sing every Monday, and we especially love it when we go out singing and get a crowd to sing along with us!

Check out the video below. Powerful. This Land is Your Land.


Pete Seeger And The Public Choir by LINDA HOLMES January 28, 2014 on NPR.

He was a person who believed deeply that people should sing, in groups, with harmony, in public — and not just in church. He was a passionate director of probably thousands of pickup choirs, formed at the beginnings of performances and disbanded when they were over...And he believed that everyone should do it, that people should retain the ability to get in a room and sing, because it was good for you, and because it taught people to pitch in and be brave.

Posted by Renate Naghavi at 11:15 AM No comments:

Monday, January 27th- rehearsal review and preview to next week

We sang:
1. Chorus of the Hebrew Slaves (reviewed all)
2. All the Little Rivers (section D)
3. Shenandoah (5-14)
4. The Hockey Song (last page)
NB Recordings of all except Shenandoah are already on the website

Posted by Renate Naghavi at 7:11 PM No comments:

Conducting: What is going on there?

Most people don't know what conducting is all about.

At a concert, don't the musicians, or choristers, already know their music? They're not really looking at the conductor, they're looking at their music. So, why does there have to be some conductor standing there waving their hands and a baton around and generally looking weird? And, doesn't the sheet music say, start here and stop here and get louder then get softer, etc? What's the point?

This New York Times article, The Maestro’s Mojo, by DANIEL J. WAKIN, from April 2012, looks at what conductors do, using 7 conductor interviews to break down the process. Right hand and left hand, the face and body are each looked at separately to see what they do, how the conductor uses them. There is the right hand with or without a baton which gives the upbeat and the downbeat and keeps the tempo, and facial expressions and even breathing can be used to communicate with the musicians.

I learned the basics of conducting in High School, and have read more about how to conduct since then, looking for rules for what to do to show a group of musicians what you want from them. But, in the end, as the title suggests, there is an intangible element that the conductor brings to the art. Some of that is done deliberately, with tempos and volumes interpreted differently by each conductor, little things changed to make each performance unique. And, some of that is just conductors expressing themselves, their mojo, and the way the others respond to that.

I'd say most of how to conduct is learned by standing in front of a group and figuring out what they respond to, working with them, and then taking that group out in front of an audience. You've got to put yourself out there, be willing to look strange with exaggerated body language, and do whatever you can to get the music to deliver a message through the musicians to the audience. The different experiences depend on how much of themselves the conductors can put out there and what message they have to deliver. For me, it also helps to think of my baton as a magic wand :-)

As Mr. Conlon (James Conlon, music director of Los Angeles Opera) put it: “You can discuss gesture and physical comportment endlessly, but ultimately some intangible, charismatic element trumps it all. Nobody has ever bottled it. To which I say, ‘Thank God.’ ” 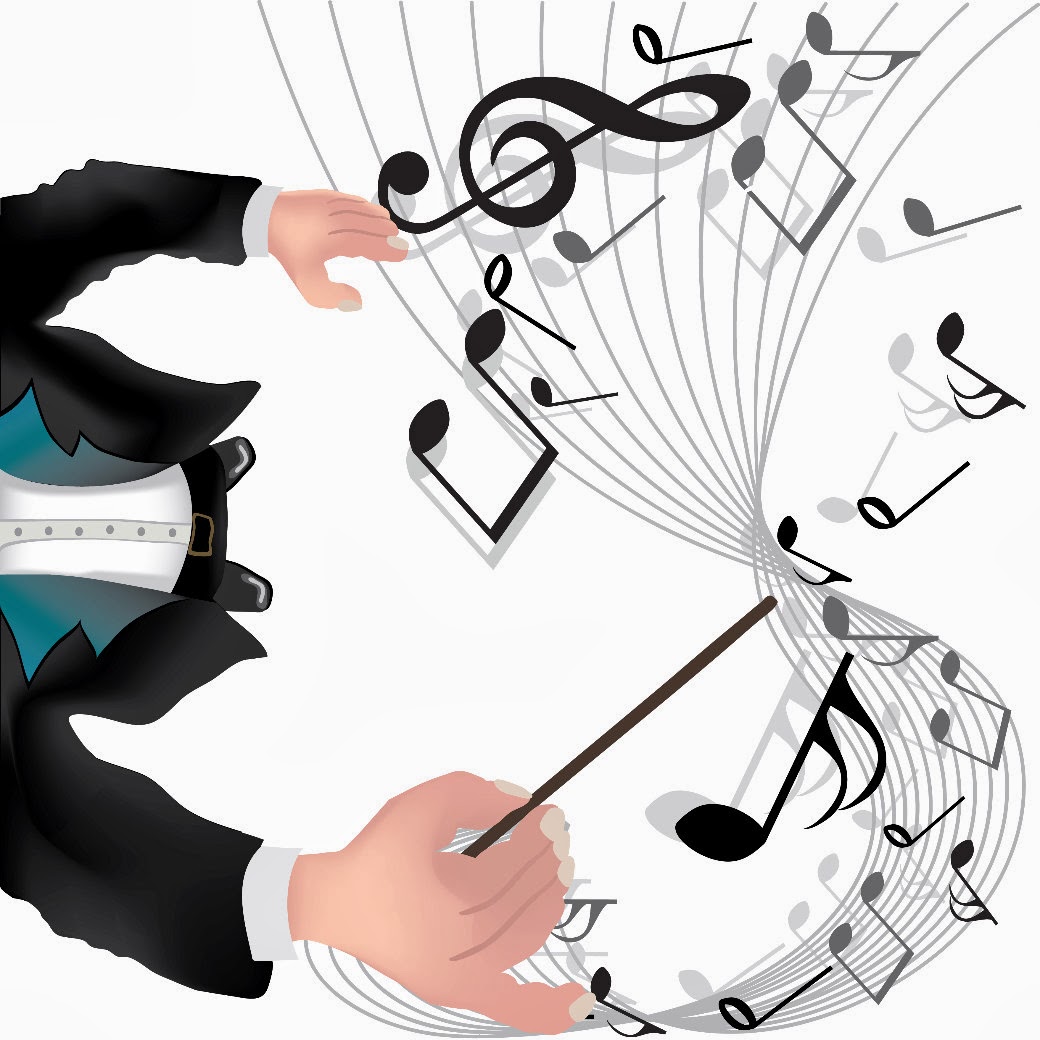 Posted by Renate Naghavi at 2:58 PM No comments:

Please put your music in order in your binder, and consider leaving everything else at home.

You can wear your uniform right away or plan to change there. It's up to you.

Note:
--Please provide your own volunteer to watch your stuff while you are singing. (we have not arranged for a volunteer)
--Do not bring anything other than your music to the stage.

FOOD-PLAZA SUITE ONLY
Dinner orders available by 17:00 in the Plaza Suite. Choir representatives to pick up the orders from Food Coordinator.
OTHER FOOD/DRINKS AVAILABLE TO BE SERVED
Water, Coffee (Decaf not available), Tea (Orange Pekoe, bring your own herbals or specialty tea), Sugar, Splenda, Milk, Cream
Grapes
Crackers and Cheese
Cookies

If you didn't order the sandwich, you'll want to bring something to eat. There will be time after the mass chorus to go out quickly if necessary (5:15-6:00 probably). We'll be there from 2:30 until quite late, I'm guessing 10:00 pm. They'll have water for us, but you might want to have your own water bottle too. There will also be some snacks (see above)

Posted by Renate Naghavi at 12:56 PM No comments:

Have you sold any tickets yet?
If not, pick some up on Sunday or Monday. The Richmond Hill Centre for the Performing Arts is a big theatre and we want to see lots of people in the seats. Tickets are available online but it's better if you sell tickets to your friends and family. Whenever we sell a ticket, some of the funds come back to us. 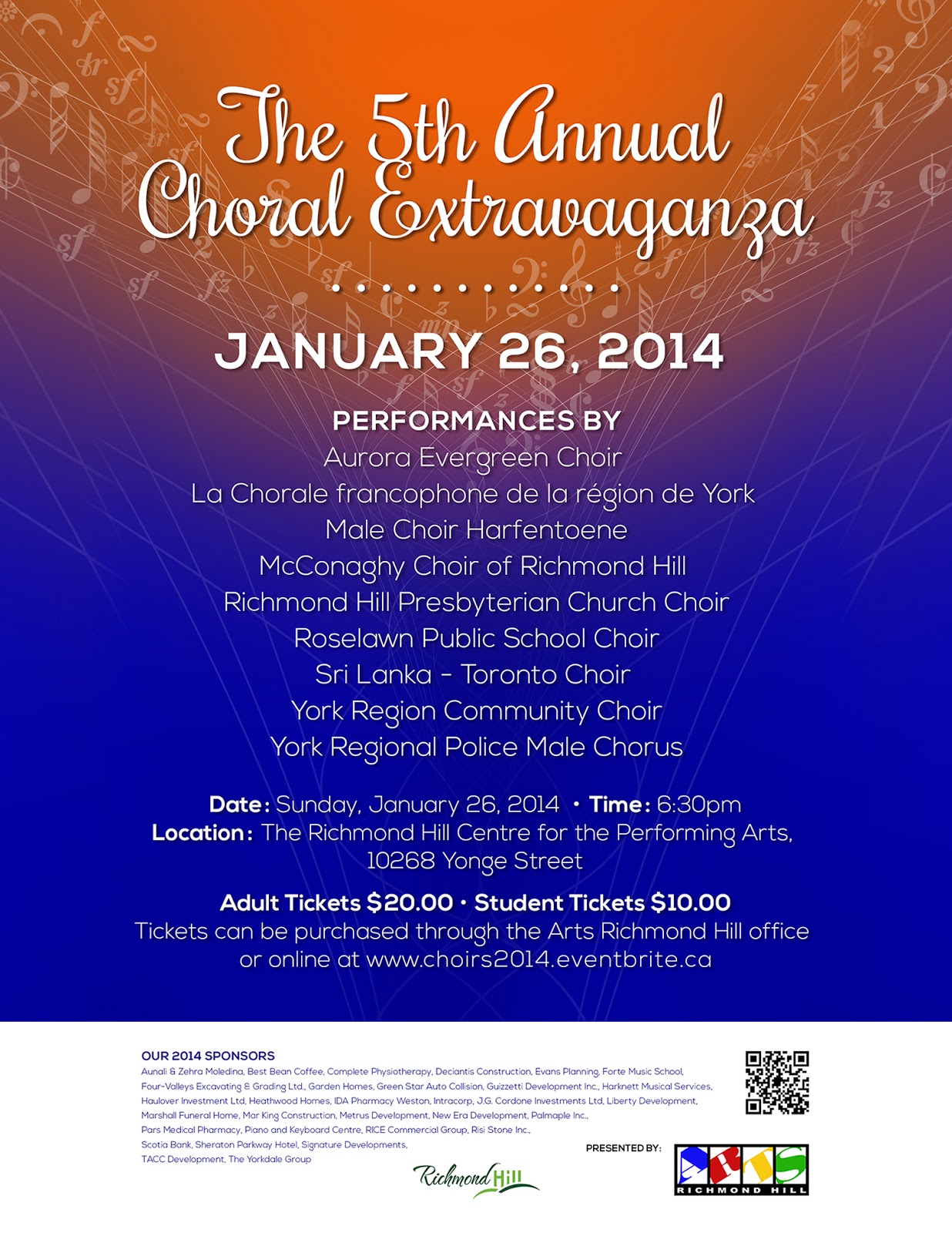 Why start new projects, begin new diet and fitness regimes, turn over a new leaf, on New Year's Day? Did writing down your resolutions work last year, or the year before? Did those new year wishes come true?


Don't we have the potential to change any day? Can't we start in the middle of the day or in the evening instead of the morning? Can't we start a new project on a Tuesday or a Friday? A new start can happen at any moment.


It's funny how we like to save starting for a special moment. The special moment comes, the clock strikes midnight, what happens? 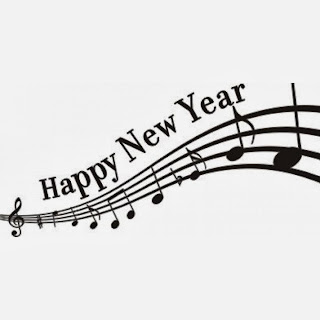 I think we're wishing for something magical to happen, for some good luck fairy to wave her wand to cast a spell that will change things, make them better. Midnight will strike and I'll be magically thinner, richer, happier.


This new year can be different, but what are you willing to do to change things? Or, are you simply wishing?

I wish you happiness in the new year. And, I will wave my wand and do my best to give you some happy moments every Monday night.

I love that choir is on Monday nights. Every Monday is special and holds the potential for magic.
Posted by Renate Naghavi at 2:23 PM 2 comments: