Music in Context: the Full Experience

The York Region Community Choir is planning a social event, a trip to the cinema, the SilverCity Newmarket Cinemas, to see the live broadcast of the Metropolitan Opera's production of La Bohème.

I love the opera and have had season's subscriptions several times in the past, but I've never experienced opera like this before. I'm looking forward to it and I'm curious to see how it feels. I'm not expecting it to be as good as the real thing, but I'm hopeful that it will be a very close second best.

People think they don't like "the Opera" because they haven't really experienced it before. They think they know what it's like, having heard bits of opera music on Bugs Bunny, or as part of a scene in a movie. Maybe they've heard someone singing (or attempting to sing) bel canto and decided it sounded like a bunch of warbling (probably a loose vibrato). But, they've never sat in an opera house and experienced a real live performance.

I compare this to introducing people to baseball by having them listen to a portion of a radio broadcast of a baseball game. Or, watching a clip of a few moments of a baseball game and deciding it's boring. Even if you're watching a home run, and fans are cheering, it's not likely to interest you, especially if they show you one of those fat guys in a goofy uniform spitting tobacco. In a ball park, it's a totally different experience. I've only been to one Blue Jays game ever, but I really enjoyed it. It was exciting and so much fun! I similarly enjoyed a live Leafs game, and I dutifully sat through Hockey Night in Canada with my family on the couch.

There have been experiments where famous musicians have gone to play priceless instruments in subway stations or on street corners. Whether or not they were wearing fancy clothes, they did not make a big impression on the passers-by. I'm not surprised and I don't understand why others are. I've heard fantastic music in subway stations that I didn't have the time to listen to. And, it's noisy and unpleasant and there are all kinds of grumpy people moving about. What's good about that? Context is huge. Package the famous violinist in a designer suit, put him in a glitzy theatre, and people pay $100 each to hear him play. Package a rock musician as a rock star in a crazy get-up and put him in a stadium with laser beams and sweet smelling fumes and people will pay even more.

I've suggested to the choir that they dress up to go to see the opera. It's part of the experience. One of my favourite parts of the opera is intermission. It sounds like a kid saying recess is his favourite subject! The intermission is when you get to enjoy the architecture, the fancy chandeliers, and the artwork of the theatre and see all the beautiful suits and dresses, the shiny shoes and sparkly jewellery! Being dressed up is worth it when you get to see all the other people dressed up. You can talk about the handsome tenor with your friends. And, during intermission, I always go down to see the musicians and their instruments in the orchestra pit. Weren't recess, lunch, and after school activities a big part of your school experience?

I played a musical instrument, clarinet, and sang in High School. Most of my friends were in orchestra in Jr. High, so I loved the violins and violas, cellos and basses. I was involved in theatrical productions too. So, my empathy goes beyond the story and into the performance when I watch an opera. I'm completely immersed in the experience.

If we had more opportunities to make all kinds of music with all kinds of instruments and sing and act and paint sets, then we would be better able to enjoy the opera, the symphony, and the theatre. If we had lots of hands-on experiences of all kinds, we'd be more empathetic people in general, better behaved too. 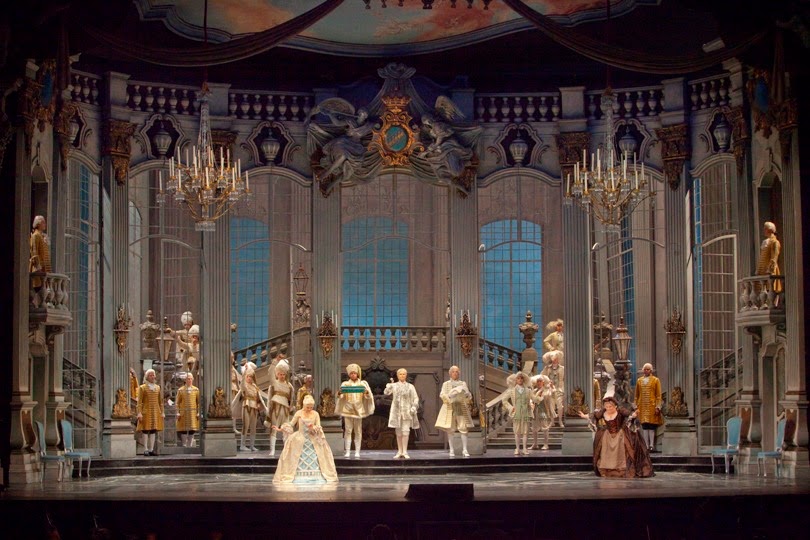 Check out how massive this set for the opera Der Rosenkavalier is!
This is a Met production.
Picture from The Recit, a Metropolitan Opera blog.